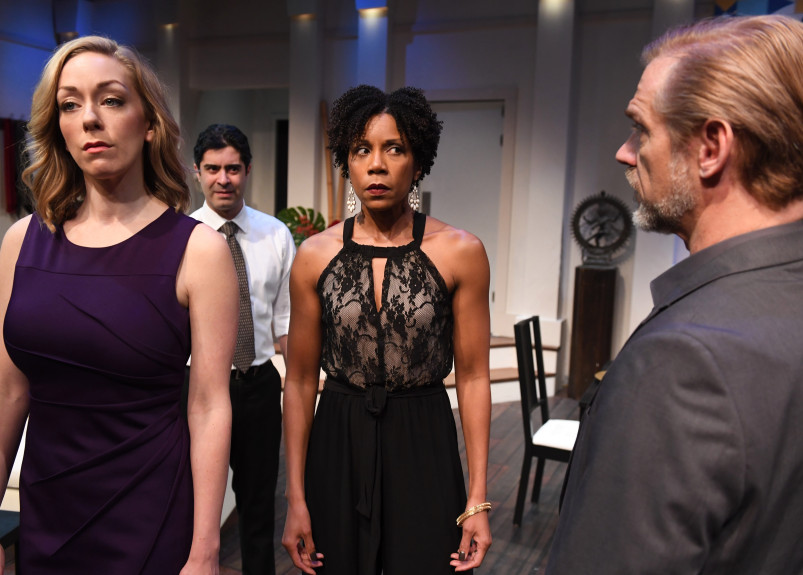 In the words of the official Pulitzer committee, the Pulitzer Prize for Drama is given “for a distinguished play by an American author, preferably original in its source and dealing with American life”. Measured by this phrase, Ayad Akhtar’s Disgraced, which won the 2013 Pulitzer and just opened in a terrific new production at The Stage in downtown San Jose, is a theatrical home run. The 2012 drama is blistering and brutal and so politically dense and culturally relevant (perhaps now more than ever) as to make your head spin.

Set in a spacious Upper East Side Manhattan apartment, Disgraced centers around Amir, a 40-year-old born and raised in America to a strict Muslim family who has rejected his faith, declared Islam a backwards religion, become a lawyer at a predominantly Jewish law firm, and married a white woman named Emily, a semi-successful painter who creates works inspired by Islamic culture. Structurally, Disgraced looks and feels like many other modern living room plays, a genre that has been done to death in the 21st century. By the time you reach the second scene, you expect that play to end up very similarly to such interesting-yet-tiresome pieces as Other Desert Cities, Clybourne Park, or Rabbit Hole, albeit without so many punchlines (thankfully).

However, at the center of the play is a 40-minute dinner party scene (yes, there’s a dinner party; see what I mean about “done to death”?) that features a discussion of ideology so potent as to genuinely force its audience to assess and reassess their own feelings towards the religious and political culture clash that we face in modern times. It’s a miniature morality play that, if Ayad Akhtar had been brave enough to allow to consume the work, removing it from any sort of context of reality, may have been a true modern day intellectual masterpiece. However, Disgraced attempts to be a traditional play, with characters and a storyline, and in that respect, it unfortunately comes up short. The characters mostly have personalities that are easily described and remain stagnant, and Akhtar never can quite figure out how to build dramatic stakes with any sense of ease, piling on so much external conflict as to make your eyes roll. Without the politics, no one would so much as glance at Disgraced. As is, however, the play is a mess, but it’s a brilliant mess, the kind of mess you’ll want to see and discuss.

Thankfully, The Stage has once again proven their exceptional capabilities as a theatre company by mounting a top-notch production of this play. Damien Seperi is first-rate as Amir, maintaining a quietly spastic anger underneath his suavely intellectual exterior. Allison F. Rich, a staple of The Stage’s productions, is reliably excellent as Emily, exhibiting a youthful delicacy with an unassuming but immense power. Jonathan Rhys Williams and Kathryn Smith-McGlynn are both very solid as Isaac and Jory, colleagues of Amir and Emily and the two guests at their central dinner party. These four cast members create a rapport together that plays with remarkable familiarity and a slight, but carefully thought-out, unease at their current situation. Though the company had only been playing their roles for a little over a week when I saw them, it looked like they had been performing this piece for over a year (and I mean that as a serious compliment). Only Salim Razawi, who plays Abe, Amir’s nephew, seems ill at-ease, always slightly out-of-sync with the rest of the cast, which could admittedly be a character choice, though one that doesn’t quite work. William Ontiveros has directed the proceedings with un-flashy directness that allows the text and cast to shine, and Giulio Cesare Perrone’s set looks exactly like an expensive New York apartment.

Flaws aside, you should absolutely go see this Disgraced. It’s the kind of theatre that will make you think, and it’s more relevant today than it ever has been.

Side note: this production features perhaps the single most well-executed moment of stage violence I’ve ever seen. Having read the play, I knew that it was coming and I was still on the edge of my seat from how astonishingly realistic it looked. Bravo to fight coordinator Will Springhorn Jr.