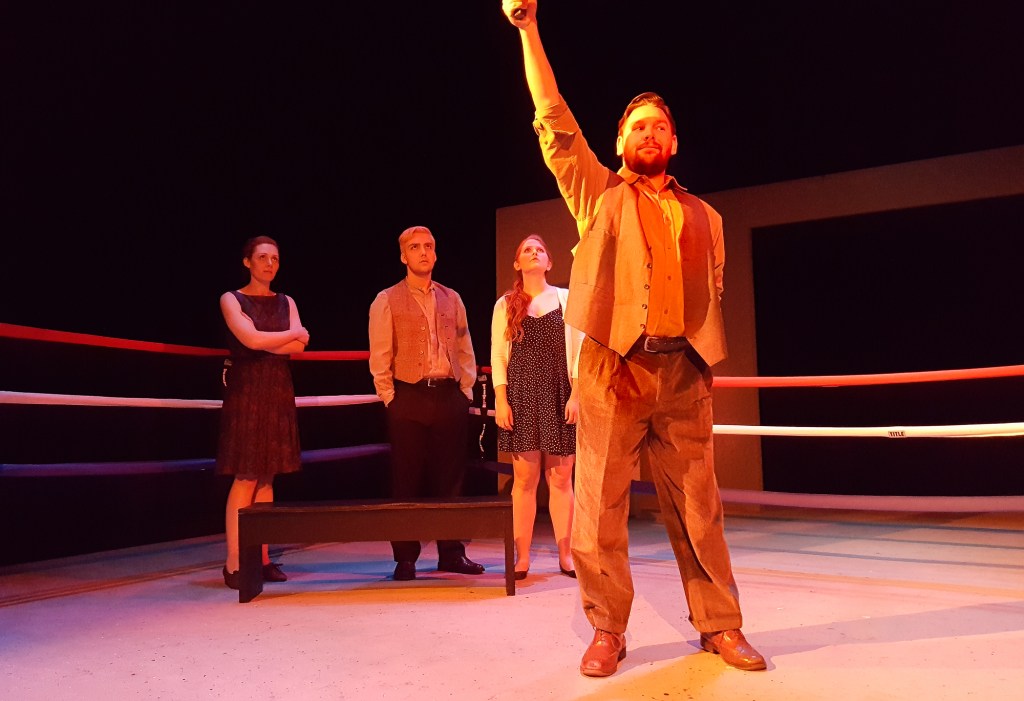 It is generally considered that the best American playwrights of the twentieth century were Arthur Miller, Eugene O’Neill, and Tennessee Williams. However, of these three authors, only a few select works are revived with any regularity. For a long time, almost all Arthur Miller revivals were of Death of a Salesman and The Crucible, with most of his other work falling by the wayside. However, two recent Broadway revivals of A View From the Bridge, in 2010 and 2015 respectively, have made the 1955 play once again eminently popular. If you missed those two revivals, fear not, for the Pear Theatre in Mountain View is presenting A View From the Bridge in a first-class production. This reviewer remains mostly unconvinced of the merits of the play itself, but Miller fans should run, don’t walk, to see this View before it closes on April 2nd.

Set in the 1950s in Red Hook, the traditionally crime-ridden and Italian neighborhood of Brooklyn, A View From the Bridge concerns Eddie Carbone, a generally well-regarded longshoreman who finds his moral and communal downfall when he agrees to host his wife Beatrice’s cousins in his house when they migrate to America without proper documents. Eddie starts off welcoming the two immigrants into his house, but becomes insanely jealous when Rodolfo, the younger and more sensitive of the two, begins to court Catherine, Beatrice’s orphaned niece whom Eddie has housed for many years and developed an obsessive and incestuous lust for.

The play is presented as a sort of Americanized Greek tragedy, with the character of Alfieri, a local lawyer, narrating the story and commenting on Eddie’s character flaws in the way that a Greek chorus might. Beyond the aesthetic similarity, Miller structures the downfall of the central character in the same way that Sophocles and his ilk were wont to do, namely that Eddie’s downfall is predetermined in the cosmos and is ultimately less his fault than his fate, his Oedipal tragic flaw being his lust for his niece, but his arguments and actions always reasonably sound throughout. Miller was no poet of the written language (though he certainly thought he was), so he would never truly be able to emulate Sophocles or Euripides, but there might have been a thoroughly interesting play to be written within the construct of a modern American Greek tragedy. However, Miller tries to have his cake and eat it too, and the results ultimately prove to be something less than thrilling.

Greek tragedy usually features events far beyond any concept of naturalism (a man plucking out his eyeballs, a woman killing her children to spite her husband, etc.), but manage to be successful onstage because their events are not depicted onstage, but rather mentioned as having happened offstage for the characters onstage to comment on. This allows for a certain distance between the audience and the events, and lets the audience focus on the words rather than the actions. Miller, however, has decided in A View From the Bridge to display the melodramatic events in full view of the audience in hopes of appealing to the audience’s modern demand of cinematic plot development. Because the audience is allowed no distance from the actions that happen onstage, ultimately the play devolves from a work of impressive social realism in the first act to melodramatic ridiculousness in the second. Practically every line in the second act is shouted and tedium inevitably sets in. Arthur Miller might have had an idea of what Greek tragedies do well, but he ignores precisely why Greek tragedies work. Ultimately, A View From the Bridge is like watching an opera in which every line in shouted rather than sung: there’s beauty within it, but without the music, what’s the point?

Now, I have an unusual aversion to Arthur Miller that I do not share with many others, so if you love Death of a Salesman unabashedly or think that All My Sons is an underrated masterpiece, you might find that A View From the Bridge is exactly your wavelength, in which case you couldn’t do much better than Pear Theatre’s production, which is small but unmistakably mighty. Most impressive is Brian Levi as Alfieri, the narrator and small participant in the story, who performs his soliloquies with the kind of soft-spoken directness that is only possible in theaters like the Pear’s highly intimate setting. Also of note are Geoff Fiorito as Eddie, April Culver as Catherine, and Marjorie Hazeltine as Beatrice, who work together with such knowingness that you buy their familial relationships instantly and never forget their bonds, even as they are inexorably wedged apart. I wish director Ray Renati had not encouraged such noisome acting in the second act, when a more calm approach could have leveled the play’s lack of proportions in its drama, but his staging is tight and effective, and ultimately serves the play very well. Norm Beamer’s set is refreshingly minimalist, though its boxing ring centerpiece gets in the way more than it helps, and is clearly inspired by Ivo von Hove’s 2015 Broadway production.

A View From the Bridge is a play that will most likely never quite work for this reviewer, but doubtless many others will not feel the same. Pear Theatre’s production deserves to be seen and quickly. Not all will love it, but those who do might find the experience indispensable.

A View from the Bridge plays at Pear Theatre in Mountain View through April 2nd. Tickets and information available here.